Perillos is a strange place. There are no tourist offices, book stores or restaurants. Hell, there aren’t even any people. It’s completely abandoned; eerily silent. 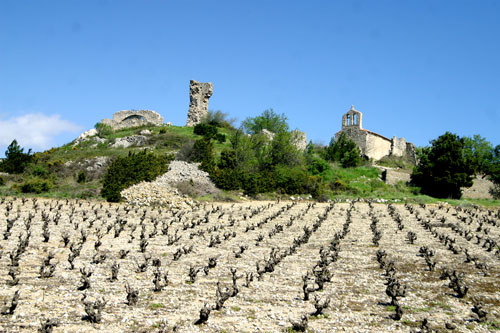 Philip Coppens expounds on Perillos and its ancient legacy in 17 Questions. He’s one of two people (Andre Douzet the other) who have championed a mystery that may soon over shadow Rennes-le-Château.

Their research indicates that the mystique of Rennes-le-Château stems not from Abbe Bérenger Saunière and a legend of coded parchments, but from the Kings of Aragon and their Corbieres confidants, the Lords of Perillos.

Abbe’s Boudet and Gelis (see Secret of the Abbe’s) each served as priests in nearby Durban, and Abbe Sauniere is known to have visited on many occasions, hence their association with the Perillos legacy, and perhaps the source of their own curious behaviour. The sensational tradition that they and others before them preserved in this remote and desolate village is only now starting to unfold. Slowly, the pear ripens, so to speak. 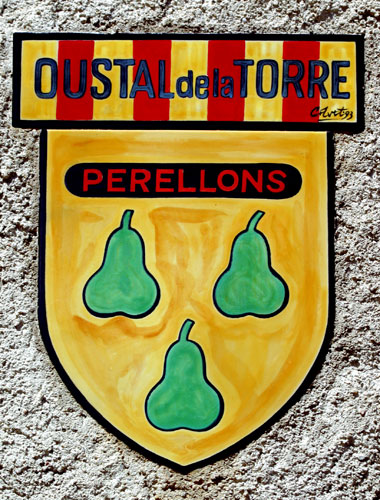 Three Pears: The Coat of Arms of the Lords of Perillos.

I’m worried, because if recent developments are any indication, Perillos is about to be marked ‘off-limits’ by the French government. Apparently, they are convinced of the authenticity of Andre’s discovery, and want to control the dissemination of his find – or conceal it! Thus, I’m anxious to return, before it’s too late.

I first visited Perillos in the spring of 2004 with my good friend Mark Foster (whose design genius has produced the look and feel of this web site). We journeyed from Rennes-le-Château for the day, intrigued by Andre’s book (Sauniere’s Model ) and the coverage of the mystery by Philip and Société Périllos. Our friend and travelling companion, Simon Cox, remained behind to meet a deadline. Simon and Mark produce the DVD magazine, Duat, and I had volunteered to show them around Rennes-le-Château in support of a future magazine feature.

We drove to Perillos with great anticipation, and dare I say, excitement. I can recall the view as we approached the distant ruins of Opoul / Perillos Castle and Salveterra village, perched atop the Opoul plateau, glimmering above the town of Opoul below. 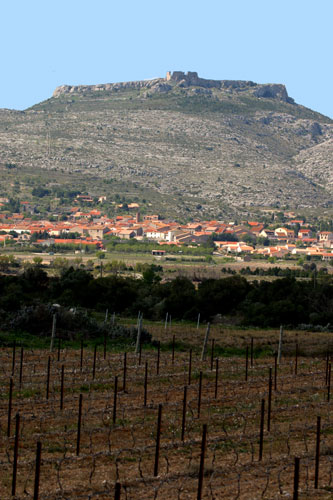 The plateau itself is known as Terresalvaesche. Salveterra, which translates as ‘Land or Earth of the Saviour / Salvation’, was the name of a chapel in the grounds of the plateau. Both names echo Wolfram von Eschenbach’s Monsalvaesche, or Mount of Salvation, from the grail romance, Parzival.

The ruins are magical, and only the slightest imagination is necessary to picture the setting as a true Mount of Salvation. If it were not for the constant luring of Perillos, one would be content to explore its charms for hours. 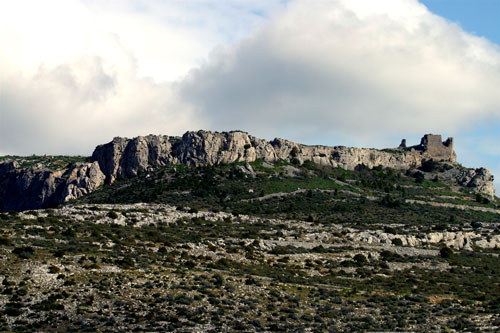 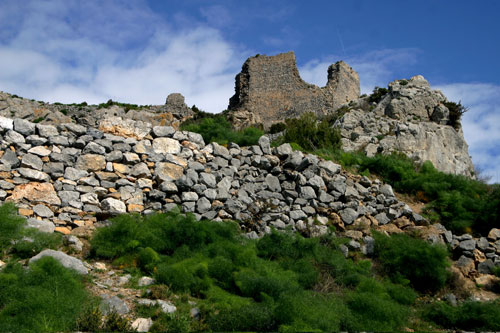 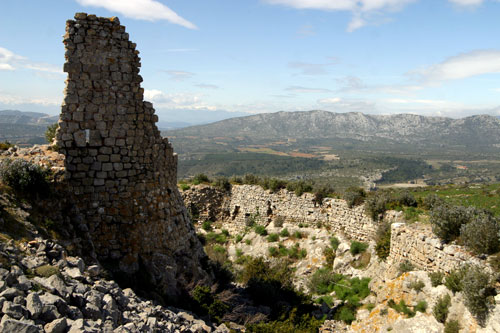 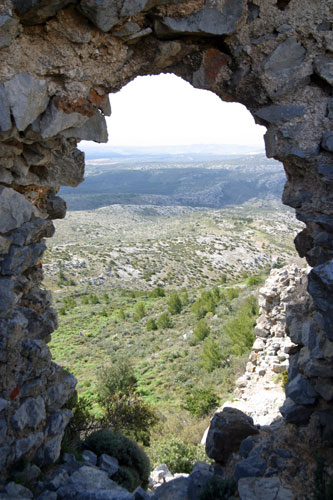 But Perillos that day beckoned, and so we cracked on. Not surprisingly, the road to Perillos is poorly sign-posted; you simply must seek it out. Once sorted, we navigated the winding 7 kilometre trek with ease, passing Saint Barbara’s Chapel on our ascent up the road to Perillos.

It is said that the Lords of Perillos are buried outside the village, although the precise location remains a mystery. This seems odd, given the lovely cemetery in Perillos. Nevertheless, this reinforces Andre and Philip’s assertion that the landscape is a repository for royal burials, which remain hidden and guarded to this day, and have been since time immemorial. 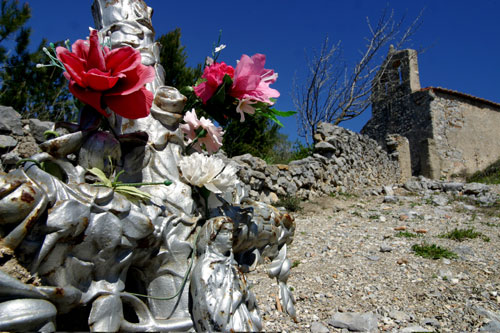 After filming and photographing from the perimeter of the village, we headed for the ruins at the centre of Perillos. I remember trailing a few feet behind Mark as we slowly ascended the steps leading to the green door of Saint Michael’s Chapel. And then it happened. 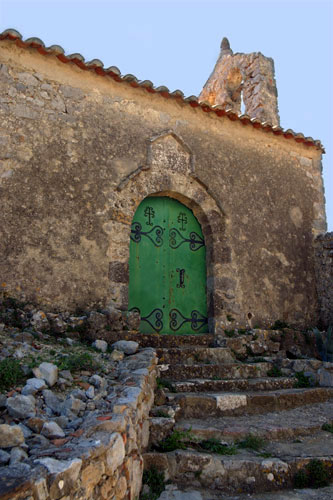 The Path to the ‘Perillos Chapel’.

With two cameras hanging over my right shoulder and a video camera swinging from my left, thoughts of the ‘Perillos Chapel’ – the Grail Chapel of Perlesvaus (written by an unknown 13th century author) swirled through my head. One must be pure at heart to enter the domain of the grail, I silently mused, letting my mind drift in the melancholy of the blistering afternoon sun.

And then suddenly, without warning or provocation, I fell. If I didn’t know better, I would say I was pushed. But that’s ridiculous. That said, I can recall the sensation as if it were yesterday.

A peculiar force, not unlike an electric jolt, reverberated through my spine, catapulting me forward with great velocity. I viciously struck my face and head on the stone step in front of me. Inexplicably, my left knee gave way like never before, or since. It buckled, twisted and bent beneath me. With all the kit I was carrying, I simply could not break my fall. I suffered with an annoying limp in my step for months afterwards, and the remnants of the injury continue to haunt me to this day.

Only recently have I learned of other, similar stories of misfortune and injury in the vicinity of Saint Michael’s Chapel in Perillos. Just what secret or legacy is the village attempting to conceal? And who is its guardian? Was I accosted by Babaos, the mythical beast that is said to rule the region? Or was it Saint Michael, or perhaps even the Lords of Perillos themselves? Occam’s Razor would spit in the face of any of these romanticized scenarios. Clearly, it would conclude, I was tired and had been incredibly clumsy – and tripped!

Then again, least we forget, the village of Perillos is abandoned for good reason, or so I am told. The elders of Opoul can attest to that.

So, I’m keen to return. In fact I must. Definitely. Before it’s too late. If nothing else I need to settle the score. After all, at present it’s Perillos one, me nil. 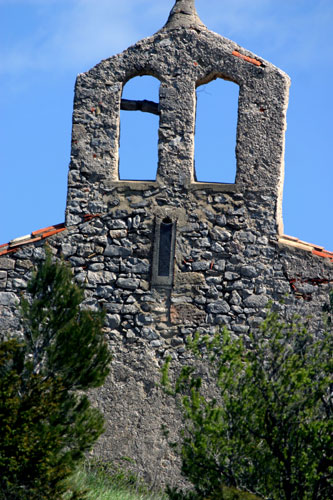 Most everything we know of the emerging mystery of Perillos is due to the work of Philip Coppens, Andre Douzet and Société Périllos. Check them out, and start by reading Philip’s provocative interview in 17 Questions.