The Legend of Rennes-le-Château

The story of Rennes-le-Château is fantastical, even mystical. Or is it? One school of thought claims it’s a complete hoax. Another believes it is one of the greatest mysteries of our time. Perhaps the truth lies somewhere in-between.

Bérenger Saunière, a humble priest, discovers coded parchments concealed inside a Visigoth pillar while restoring his church. Seeking assistance in deciphering the ciphers, he travels to Paris and mingles with the Parisian elite, including Opera singer Emma Calve, who is rumoured to be his lover. He visits the Louvre and acquires replicas of three paintings, including Nicholas Poussin’s ‘The Sheppard’s of Arcadia’. The painting features an ancient tomb with a mountainous landscape identical to the setting of a tomb near Rennes-le-Château.

Upon his return, Saunière renovates his church, home and village in a lavish, esoteric fashion, concealing his discovery in a veil of symbolism. He excavates the church cemetery at night and defaces the tombstone of a noble. Like the parchments, when decoded the tombstone reveals cryptic references to Poussin, Dagobert II, the Priory of Sion and pentagonal geometry. He appears quite wealthy, and why not, he’s discovered a treasure.

Before his death, Saunière entrusts his secrets to his loyal housekeeper, Marie Denarnaud. They are believed to include the treasure of the Templars, Blanchforts, Cathars, or King Solomon, as well as the knowledge that Mary Magdalene was Christ’s wife and mother of his children and that the holy couple are buried nearby. Her fate is cruel. A crippling stroke ensures that she takes her secrets to the grave.

Later, researchers discover evidence of natural and man made markers such as mountains, menhirs and churches at precise distances from each other, forming a series of pentagrams in the landscape around the Rennes-le-Château area, which coincidently, sits near the French Date Line, more commonly known as the Rose Line. This pentagonal geometry is also observed in the Poussin painting and is associated with the Magdalene via the pentagonal orbit of her celestial counterpart, Venus, the only star that rotates in the sky in the formation of a pentagram every 8 years.

Bérenger Saunière was a pawn in a complex story of deceit and collusion. If he discovered a treasure, it was probably the nest egg of an earlier Rennes-le-Château priest, or his friend, the priest in nearby Rennes-les-Bains, Abbe Boudet. It’s likely he was instructed where to look, possibly by the mysterious foreigner, Monsieur Guillame.

Saunière’s pillar was neither Visigoth nor hollow and there is no proof he ever travelled to Paris. His brother Alfred did. They were both priests, and researchers have repeatedly mistaken Alfred for Berenger. Furthermore, 16th century painter David Poussin lived in Italy and never visited the Rennes-le-Château area. There is no record of a tomb on the proposed ‘Shepherds of Arcadia’ site near Rennes-le-Château until the early 1900’s. The alignment of ancient structures in the landscape (i.e. churches, etc) at precise distances from each other occur within expected probabilities. That is, the alignments exist by chance, not design. Emma Calve wrote a detailed autobiography about her life and experiences but Saunière was never mentioned.

Abbe Saunière’s renovations, which mirror designs of other local churches, were funded by the sale of Masses to other priests. He was suspended for having solicited more than he could fulfil. Deprived of his extra income, he died in debt.

Later, a restaurant is opened on his former estate and the owner reports a story about Saunière having discovered a treasure. Tourism is his goal. The story is featured in the 1956 South of France Despatch. In the same year, Pierre Plantard and his colleagues register the newly formed Priory of Sion, named after a local mountain.

After serving time in prison for fraud, Plantard, the future Grand Master of the POS, teams up with a colleague to provide material to a best selling French author for his new book. This includes parchments, which Plantard and his colleague confess to having faked. The French author later provides the BBC with input for their television programmes on Rennes-le-Château. Three (now famous) researchers, Michael Baigent, Richard Leigh and Henry Lincoln consulted on the programme and proceeded to publish an international bestseller on the subject; The Holy Blood and the Holy Grail. Plantard resigns from the Priory of Sion after being investigated by a French Judge, admitting it was all a hoax. 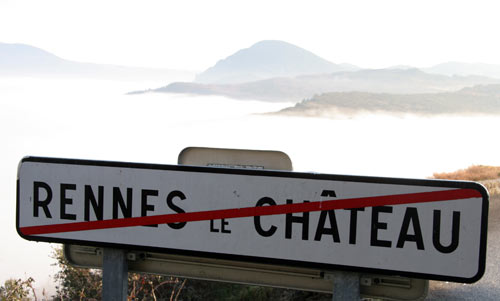 A misty midwinter morning in Rennes-le-Château