It’s a late summer’s evening and my good friend, the esteemed author Patrice Chaplin, and I are sitting on a park bench in a churchyard that adjoins one of London’s oldest and most famous high streets. Nothing unusual there, except for the fact that we are sitting in the middle of an inter-dimensional portal.

I’m rather new to the whole portal thing, and as I understand it, one could be standing in the middle of one and not know it. And what’s more, I’m keen to enter one.

“Entering a portal requires the assistance of an initiate,” Patrice mutters under her breath, breaking a moment of introspection and silence, as if talking to herself. “They need to prepare it in advance you see, make sure it’s ready. And even then, well, I have known many who were not spiritually ready for the experience and who died in the process.”

“I reckon I’m ready,” I retorted eagerly, if not a bit defensively. 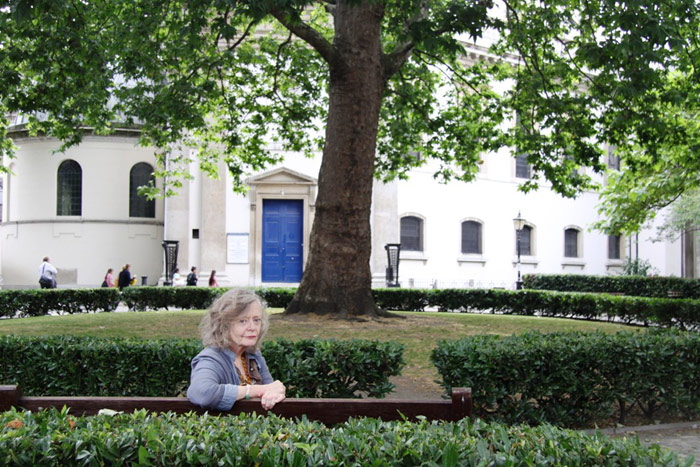 Patrice Chaplin, sitting in the portal she once entered

Patrice ignores my not so subtle plea to be taken through the portal and instead recalls her own journey several years ago. I’m amazed at her account, and the fact that other notable literary figures have apparently known of its existence for centuries.

But here I must stop, for Patrice is featuring the London portal, and others, in her just completed book, and on her upcoming tour (details forthcoming). Watch this space. And in the mean time, I’ll be sure to let you know if I succeed in entering it. Assuming I survive.