Paranoia at the Chair of the Devil

Rennes-le-Château never disappoints. On my last visit, I stumbled across Michael Beignet and the NBC Dateline film crew, as well as a lovely lady from Gloucester, England, who is an ascended master from the future operating in the 10th chakra, capable of reading the Akashic record and speaking to dead Abbes. And that was in the first 15 minutes of my visit. I love this place! By the way, the ascended master’s insights were very understated and extremely illuminating.

On the home page of Arcadia I mention that one would be forgiven for believing there is no mystery in Rennes-le-Château, or that the only mystery is why there are so many lies associated with the mystery! For whatever reason, the mystery, which I now prefer to call a ‘legend’, seems to be a magnet for shadowy forces and misinformation. Nonetheless, the legend can grab you, like it has me, and its grip can be quite strangulating.

Like most everyone else, I first became enamoured with the legend of Rennes-le-Château while reading The Holy Blood and Holy Grail. Years later I visited the villiage and requested the guidance of an expert. I was put in touch with Jean Luc Robin, a distinguished French gentleman who owns the restaurant in the village, and who once served as curator in Abbe Sauniere’s home, the Villa Bethanie.

I recall Jean Luc taking me around to the usual sites, including some he reserves for true enthusiasts. After an exhaustive day, we said our goodbyes and agreed to keep in touch. By the way, Jean Luc has gone on to write one of best, most personal books ever on Rennes-le-Château, the superb new Rennes-le-Château: The Secret of Saunière (the book is currently being translated into English by Henry Lincoln).

The next morning I set off at dawn to drive to the ancient spa town of Rennes-les- Bains, to spend a little more time at the eerie Devils Chair, soaking up the atmosphere and taking some pictures in the fresh morning light. No sooner than I put the top down on the rent-a-car and drove out of the parking lot of Hotel Château de Joyeuse, was I terrorized by a motorist who proceeded to ram by car and intimidate me with shouts and expressive hand gestures. Fortunately, my French is a bit weak, so apart form the universal hand gestures, I took no real offence.

Unfortunately, this guy was clearly intent on running me off the road, and all of sudden my journey to Rennes-les-Bains was becoming more and more stressful, and dangerous. Ultimately, I lost him with a hairpin turn into the parking lot just outside town, which serendipitously, was within walking distance of the Devils Chair. The hike up the Within 30 minutes I realized that my suspicions were true. I had been followed. 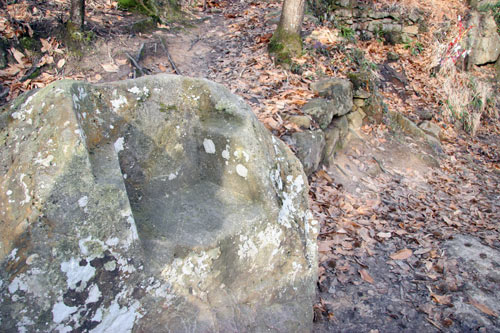 The Devils Chair and ancient well

It turns out that Henry Lincoln is not the only one who has had tricks played on him in and around Rennes-le-Château, and the experience I had is actually quite common, so I am told.

Ok, so before we get all conspiracy like, let’s apply Occam’s Razor to the situation. That’s it! Maybe the chap who terrorized me just doesn’t like tourists. That’s it. I’ll keep telling myself that then, shall I?