AN INTERVIEW WITH BLOODLINE

The highly anticipated documentary Bloodline has tantalized Rennes-le-Château enthusiasts for months. Its alluring film clips and evocative photographs of ancient treasure have created a producers dream; everybody’s talking about it.

Perusing the web site, we learn that Bloodline:

“Follows a two year investigation by filmmaker Bruce Burgess into the enigmatic Priory of Sion and their secrets.”

Working alongside Burgess on the project is René Barnett. Both Barnett and Burgess have participated in the interview below.

While everyone loves a mystery, few truly appreciate a discovery. Thus, it is not surprising that the run up to the release of the documentary has generated considerable scepticism within the genre.

Amidst the controversy, the Bloodline producers have drip-fed film clips and provided further insight into the nature and implications of their discovery. Ironically, their hypothesis purports what many enthusiasts have wanted to believe all along; that the mystery of Rennes-le-Château involves real parchments and real codes and is associated with Mary Magdalene and Jesus.

If true, history will be rewritten, and the majority of the Rennes-le-Château community will have been vindicated. So why the scepticism?

Now, on the verge of its long awaited release, Arcadia presents a candid interview with the producers of the most hyped Rennes-le-Château event in memory.

If you are unfamiliar with the Bloodline’s alleged discoveries, or have not visited their excellent website in recent weeks, then it would be advisable to review their findings before proceeding.

The tagline to the long awaited film: Bloodline

Welcome, and thank you for participating in ‘17 Questions’. We’re very excited to speak with you. I believe we have much to cover, so let’s begin!

Thank you for the interest. First, I’d like to say that that this interview is in no way an attempt to ‘silence the critics’ or ‘set the record straight’ on our part. We have, and will continue to, simply tell the truth as we find it.

Fair enough. Thank you for that.

1. Let me start by saying that the website and film clips for the documentary look brilliant – well done! When can we expect to see it in the UK / US, and elsewhere?

Bloodline will be released in 2007. We don’t yet know the exact date.

2. How many individuals comprise the team – not just the production group, but the research team?  Can you name your subject area experts?

We have a production team of 6 and have utilized the expertise of some of the best researchers in the field. We especially want to acknowledge Robert Howells and Nicole Dawe. All along the way, we have consulted with many authors and experts, some of whom are in the film, including Antoine and Claire Captier, Andre Douzet, Phillipe Canal, Daniel Duges, Margaret Starbird, Tim Wallace Murphy, Tracy Twyman, Guy Patton, and the Reverend Lionel Fanthorpe among others.

3. Some of these individuals have been involved in the process of making a documentary on Rennes-le-Château for a while now. May I ask what became of the 2005 initiative to provide the Mayor of Rennes-le-Château with 200,000 Euros in exchange for the right to excavate various parts of the domain?

That isn’t quite right. There was never a deal to ‘excavate’ anything. We have an agreement with the commune signed by Mayor Lhuilier and the sous prefecture of the Aude Region  granting us exclusive right to film a restoration of the Church of Mary Magdalene when, and if, that occurs. As we understand it, the Mayor is still awaiting permission from the DRAC to carry out the restoration.

4. What is the Bloodline’s relationship with the Rennes-le-Château researcher known as Ben Hammott (alias Tombman)?

Bruce (Burgess) has filmed a series of interviews and sequences with Ben this past summer, which will be shown in the film.

So Ben is not part of the Bloodline Research Team?

No, along with others we featured, we simply filmed Ben, his research and movements.

5. The details of your discovery have been slowly disseminated to an audience ravenous for the truth. It seems this long introduction period has led to much scepticism. Do you feel that was inevitable?

I suppose it is inevitable. Lots of people want lots of answers to this mystery, as we do. This has been a long investigation which was conducted largely undercover, and we have released our ‘discoveries’ as we’ve found them and had some analysis completed on them.

Do you feel it has been unfair?

We feel healthy scepticism and debate are good, and we welcome them. In fact, that’s what we hope to foster with this film.

6. Why do you think the Rennes-le-Château community in particular is so sceptical?

I wouldn’t presume to speak for them. But I imagine it has something do with the fact that this is their home, and we respect that.

7. There seemed to be much criticism, as noted in the various Rennes-le-Château web forums, of the fact that you were originally charging to view the film clips. What was your strategy in doing so?

We are a small, independent film company and were trying to offset website costs, but when we heard many people internationally were having technical problems viewing the clips under the pay system, we reformatted the site and made the clips free. That seems to have alleviated the viewing problems.

8. Can you share which individual, organisation or movement has been most supportive of your quest – and discovery, and which has been most sceptical and troublesome?

All the people I mentioned earlier have been supportive.

Have you or the team been threatened or in danger at anytime as a result?

In addition to members of our team having been followed, at times, by persons unknown, we have had some vague, and some pretty direct, threats via email, our computers have been hacked, and we’ve had some phone wire taps.

9. On your website, you indicate that your discovery was found in a cave which ‘has become known locally as the “cave of the Magdalene”’. Is this cave one and the same as the ‘Grotte du Fournet – dite de la Magdeleine’, or ‘The Burial Site of the Mary Magdalene‘, or one of the other nearby grottos (i.e. one of the ones 30 yards away),  just a short distance from the village?

We can’t reveal the exact discovery location, but it was near the ‘Grotte du Fornet.’

Grotte du Fournet – The Cave of the Magdalene © Andrew Gough 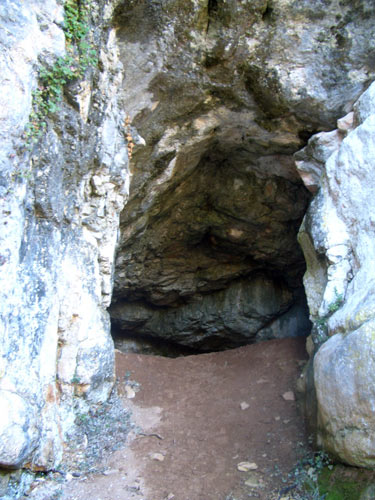 The Entrance to ‘Grotte du Fornet’
Is this the site of the Bloodline discovery? © Andrew Gough 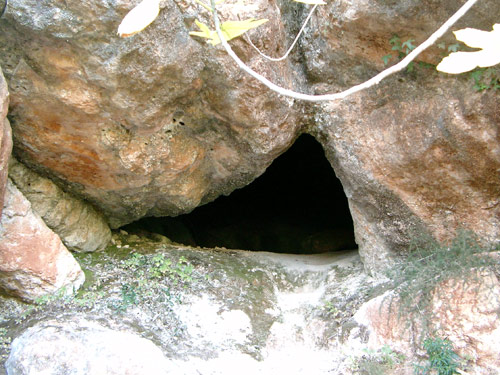 A Grotto near The Cave of the Magdalene
Alternatively, could this be the Grotto where the Bloodline made their discovery? © Andrew Gough 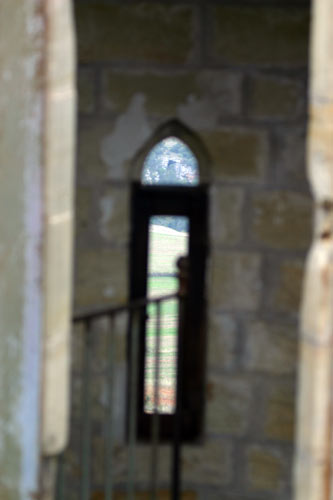 10. The Tour Magdela points directly at the grotto (‘Grotte du Fournet – dite de la Magdeleine). Did that lead you to use the Alter Painting of Sauniere as a clue?

Written clues led us to the site.

Can you expand on that? Which clues? What did they reveal to you? Were the Poussin paintings of any assistance?

We were following a series of written clues found in the region which specifically spoke about, and led to, the chest. The Poussin paintings had no connection to this discovery. 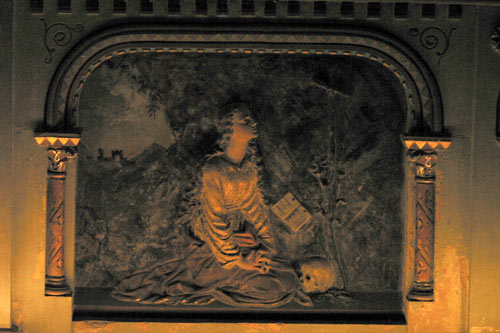 The Alter Painting of Mary in a Grotto was designed by Sauniere:
Is this one of the Bloodline’s ‘written clues’? © Andrew Gough

11. Speaking of the ‘Grotte du Fournet – dite de la Magdalene’, or the ‘Cave of the Magdalene’, clearly there are the remains of an ancient tomb there. Whom do you believe was once buried there?

We have no idea.

So no-one on the team has speculated?

Of course we are aware of the interesting possibilities, but we weren’t attempting to prove any particular thesis, including any involving bodies and tombs. 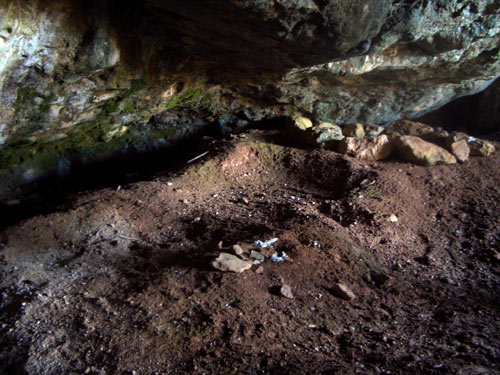 12. Again, back to your sources for a moment; was your discovery predicated on having decoded various clues (Sauniere’s church alter painting, for instance), or were you pointed to it via your Priory of Sion contacts? Or both?

As I said above, in searching for the chest, we were following a set of written clues, which, incidentally, bore Berenger Sauniere’s signature.

13. You indicate that your discovery includes ‘a small, conical pottery cup, a six inch high pottery jar, a cracked glass vial containing a rolled parchment, and a number of ancient coins’, and that these artefacts were discovered in a chest. Can you provide the dimensions of the chest, and was it buried or hidden? How deep? How concealed was it?

The chest, which measures approximately 15 inches by 10 inches by 8 inches, was completely buried several feet underground.

Where is the treasure now? What country? In whose possession?

The artefacts are in a secure location.

Are they being contested by any particular party or country? 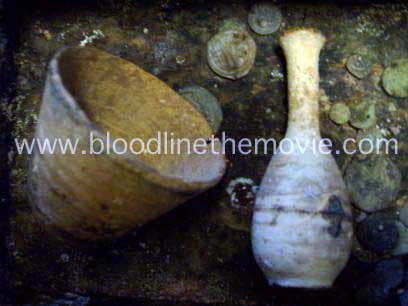 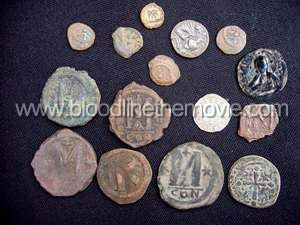 Bloodline Artefacts: Souvenirs from the Marriage of Jesus and Mary?

14. Additionally, with respect to your discovery, you mention that ‘The rolled parchment within the vial is particularly interesting as it was said that the Abbé Bigou, the priest of Rennes-le-Château did hide a small vial inside a wooden pillar in the church, which was then discovered by his successor, Abbé Berenger Sauniére in 1891. We think that this could be that vial, and that parchment’.

May I ask, does the parchment contain a hand written biblical scene penned in Latin, like those in the Priory Documents, alleged to have been discovered by Sauniere, and if so, which biblical scene is portrayed?

No biblical scene is portrayed. It is a handwritten map, not text, and primary analysis by the Aude Departmental Archives at Carcassonne indicates it to be from the 18th Century. Further, the small glass vial in which the parchment was contained fits nicely in the slot in the baluster from the Church of Mary Magdalene now in the possession of Antoine Captier. We think this vial and parchment could be the one original found by Sauniere. 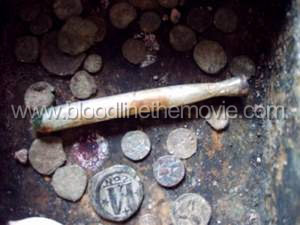 Bloodline artefact.
Is this the same Vial / Parchment found by Abbe Sauniere?

15. Returning to the film clips for a moment, and again, they look amazing; one of them shows the Rennes-le-Château icon Alain Feral leading Bruce into to a ‘secret room’ in the church at Rennes-le-Château; a location that no other has been to for a very long time. Several Rennes-le-Château researchers have pointed out that this is not true, that they themselves have visited the secret room and that it’s frequently accessed by television crews. This realisation has left many wondering why a secret of this magnitude requires such dramatization. Can you comment?

There was no dramatization. Alain Feral showed Bruce into the room. When Feral says “Never,” we believe he was referring to the fact that the sacristy door is normally locked and is rarely filmed.

16. Enough about the criticisms and sceptics; they were inevitable. Tell us about the responsibility you feel for communicating this discovery to the masses?

We feel a responsibility to tell the truth.

Have you contacted the Catholic Church and informed them?

Who have you pre-announced the nature of the discovery to?

17. What new piece of information can you share with us that has yet to be revealed – some nugget, or photo, that will leave us gasping for more?

I’ll refer you back to question and answer 14. The indications are that we have found Abbé Bigou’s parchment.

Arcadia would like to thank the Producers of Bloodline for their candour and patience in discussing some awkward aspects of a very, very exciting new discovery. Best of luck with the film; we are all looking forward to it very much!

We’d like to thank you once again, Andrew, as well as all those who have sent the emails of support we have received through our website. We are very appreciative.