AN INTERVIEW WITH SUSAN BLACKMORE

In support of his yet to be released documentary, The Alien Within, Andrew Gough sat down with renowned consciousness expert Susan Blackmore to discuss Sleep Paralysis, Alien Abduction and other conundrums of the mind. Blackmore is a much celebrated figure in the consciousness genre and has a degree in psychology and physiology from Oxford University (1973) and a PhD in parapsychology from the University of Surrey (1980). In addition to consciousness, her research interests include memes, evolutionary theory and meditation. She practices Zen and has actively campaigned for drug legalization. 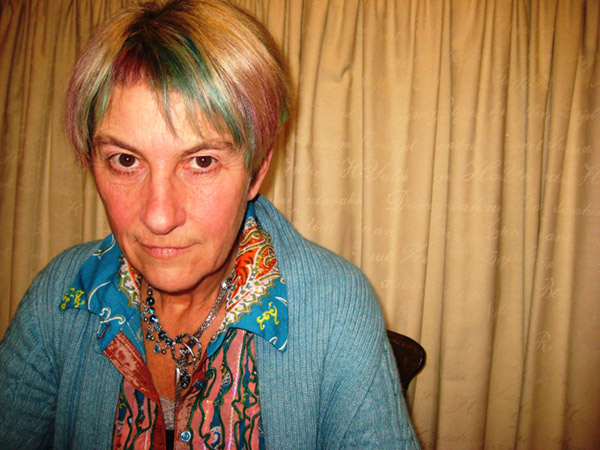 Susan during the interview © Andrew Gough

You are quoted as saying that you no longer work in the related fields of what I call the paranormal. Why is that?

Basically, I became obsessed with the paranormal when I was a student, because of the weird experiences I had. After 20 years of doing experiments I became utterly sick of the whole thing. I tried to escape the genre get out of parapsychology altogether and told everyone that “I don’t work on the paranormal anymore,” and if I had not done that I would never have escaped.

How did your work evolve after your initial focus on the paranormal?

I had collected lots of cases on people who had strange experiences and started to get very interested in what happens on the border of sleep. It soon became apparent that many of the experiences were Sleep Paralysis: a really weird experience that people get on the verge of sleep, most often going into but sometimes coming out of sleep, when one lies in bed and cannot move. Often it is combined with buzzing noises and sexual arousal and the sense of presence.

What are the implications of Sleep Paralysis and how widespread is it?

There was a famous Roper poll that claimed that 4 million Americans had been abducted by aliens, but in reality, the symptoms were all characteristics of sleep paralysis. If people do not know what Sleep Paralysis is they jump to all sorts of conclusions, such as aliens being in the room or that they are being attacked by demons. It turns out that almost every culture we know about has some sort of sleep paralysis. We have historical documents going back centuries describing it and paintings that depict it.  In England in particular, the Incubus and Succubus were part of mythology and were later replaced by the Old Hag, which has been transported to Newfoundland, where it is still quite prevalent.

Unless you know the modern science and know what is really happening you are prone to making wild conclusions and thus, the most common explanation is that people are being abducted by aliens.

What is the mechanism behind Sleep Paralysis?

Sleep Paralysis might seem a bit weird at first glance, i.e. why should one wake up paralysed etc, but it actually makes sense because in Rapid Eye Movement (REM) your whole body is paralysed, so you don’t act out your dreams. The interesting this is that sometimes the timing mechanism goes wrong and you wake up while you are still paralysed. Or you go straight into REM sleep. Dreams typically happen in REM sleep and in dreaming sleep you whole body is paralysed. Additionally, we know that along with this paralyses you have lots of areas of stimulation in the brain. You have the sexual arousal that is normal in dreaming state. You have the sense of presence that produces this awful sense that somebody is in the room.

Is Sleep Paralysis rare or is it quite common nowadays?

Sleep Paralysis, as a natural human phenomena appears all over the place in literature and stores and paintings, such as Henry Fuseli’s famous painting of this horrible creepy thing sitting on this lonely woman’s chest, called ‘The Nightmare’. This is because your breathing is still on automatic control and if you try to breath yourself you feel like someone is squashing your lungs.

Have you found any similarities between Sleep Paralysis and the modern day Alien Abduction Phenomena?

As I met more and more people who believe they had been abducted by Aliens I began to see the connection with Sleep Paralysis: I realised that the Alien Abduction Phenomena is our modern day Sleep Paralysis myth.

Typically, the Alien Abduction experience happens in the dark, while one is lying down. Then there is the humming and buzzing noises that accompany it. The sense of presence, that somebody is there. You cannot see the intruders and thus your imagination is in hyper active (mode) and you conjure up what you associate with your experience from the media, such as having watched the X-files. I mean, imagine what people think when they experience all that? Many of them conclude: “It must be an alien craft.” In different cultures people see different things, based on their heritage.

If you watch the X-Files, then that has primed you to interpret what you are dreaming in a certain way. Yet we must ask why do people see the same thing if it is just sleep paralysis? Typically, people have all seen the same images, such as cinema, and that is why they conjure up the same images. But there is more to it than that. The brain seems to represent certain experiences in the same way.

What is your view on commonly reported occurrence of ‘missing time’?

I have never been convinced by these missing time stores. Sometimes it is pretty clear that the experiencer was asleep.  In my experience, some of them have fallen asleep in their cars and taken micro naps or parked by the side of the road, etc. There is never any good evidence that there was in fact, ‘missing time’. Quite honestly, most alien abductions occur at night, when it’s dark, and very often on the verges of sleep. There are some bright daylight ones, but they are more rare.

When does Sleep Paralysis typically start?

Something approaching 50% of the population have experienced Sleep Paralysis, albeit briefly, on a few occasions. A few people get it again and again and for them it typically started early in childhood.

There is also clearly some element of false memories in Alien Abduction stories. What typically happens is someone has some sort of experience and when they dredge that memory up and recount it, the story becomes embellished, altered, overlaid as it were. False Memories can be very important in Alien abduction experience because hypnotists want to drive the abduction story out in more detail. When you are hypnotised, you remember more, but a lot of it will not be accurate.  You dredge up things that you have imagined in addition to those that are true. It’s sad because I’ve met a lot of these people and they will tell you how they were hypnotised and what their actual experience was. But it was overlaid, so we do not know what it was. 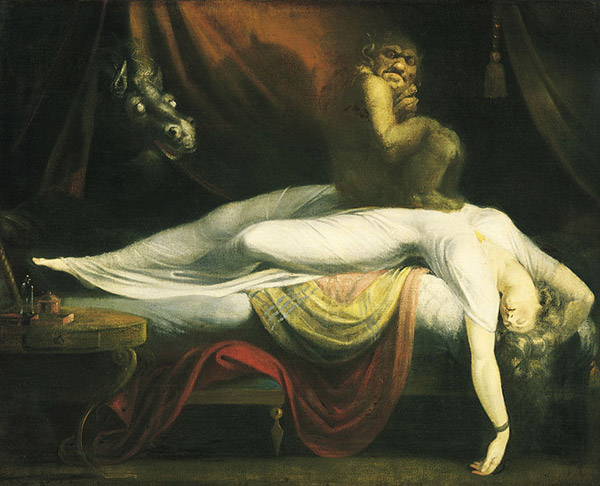 Tell me about your experience in the laboratory with Michael Persinger’s famous ‘God Head’ device?

I was lucky enough to be subjected to Michael Persinger’s God Helmet, and that really was an interesting experience.  He claimed that by manipulating patterns in the brain he could induce different experiences. In support of my research, he produced abduction type experiences for me while I was in his lab. I was lying in the dark and for quite a few minutes before anything happened. And then I started getting loads of weird sensations. I am not naive as far as these things are concerned. At first I felt tingly, like I was floating and then my whole body seemed to be stretched out as if my arms and legs were being pulled up the wall. And then, out of the blue I was angry. I was angry about absolutely nothing. A very powerful emotion, and then it was gone. And then terror came and overwhelmed me. But as soon as it arrived it switched off.

Some of the things I experienced were reminiscent of classic alien abduction experiences, such as the feeling of being manipulated.  The experience had not replicated sleep paralysis but by and large it was the same.

So you started out by asking where does consciousness come from? That is a mystery that will keep my going for the rest of my life. 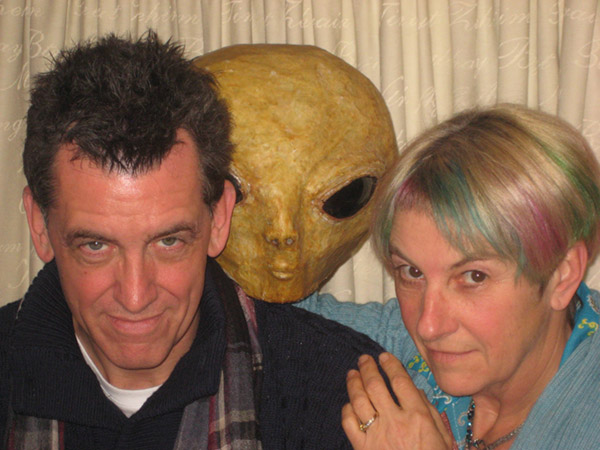 Andrew and Susan clown around during the interview © Andrew Gough