There is an image of Cybele, the mythological ‘Mother of the Gods’, that has haunted me for years. The early 20th-century postcard shows an eroded rock-statue of the Goddess on Mount Sipylus, Turkey, with an exhausted looking traveller recuperating at its base. The ancient relief is attributed to the Hittites and, according to Pausanias, the 2nd-century Greek traveller, geographer and author of the ten-volume epic, Description of Greece, arguably the world’s first guide book, the Cybele relief is the earliest representation of the Mother Goddess ever created. And Pausanias should know – he was a local. 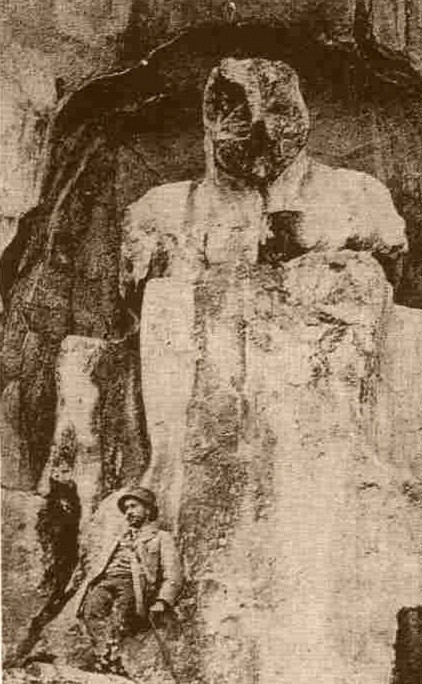 The vintage French postcard of Cybele on Mount Sipylus

I moved from London to Istanbul in early 2013 and was keen to explore Turkey, an ancient land that I had studied but never toured. So, when the first Turkish Bayram arrived, I was off.

My flight from Istanbul landed in Izmir late morning and I headed straight to Manisa, a city in Turkey’s Aegean region, about an hour’s drive north of Ephesus. My hope was to locate the Cybele relief, which I understood was located on the northern flank of Mount Sipylus, part of an ominous mountain range and one that casts an omnipresent shadow over the town, with minimal struggle. The region around the Mount Sipylus is fascinating and is steeped is prehistory, including over fifty sets of fossilised footprints dating to around 25000 BCE and famous (albeit curious) tombs, part of the ‘Yortan culture’, contemporaneous with Troy II (3000-2500 BCE), and celebrated for their unusual grave goods.

Prepared as I was, I struggled to find the Cybele relief, until, that is, a car park attendant in a roadside amusement park informed me that the monument I was seeking was situated on the mountain cliff in front of me. I couldn’t believe my luck, and enthusiastically began my climb. As I manoeuvered through the dense undergrowth, I remembered the parting words of the attendant, “Just follow the path.” “What path?” I thought, for there was clearly none in sight. 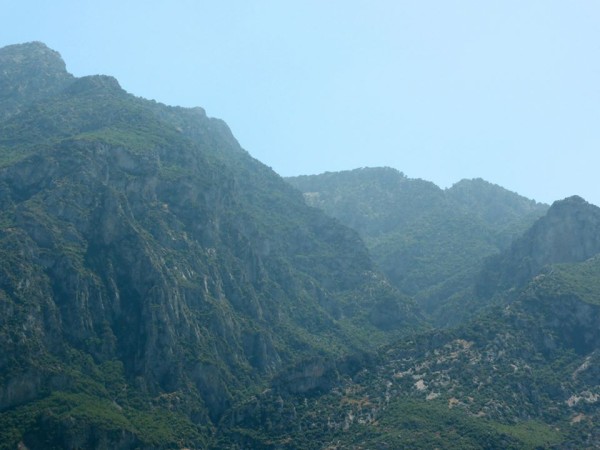 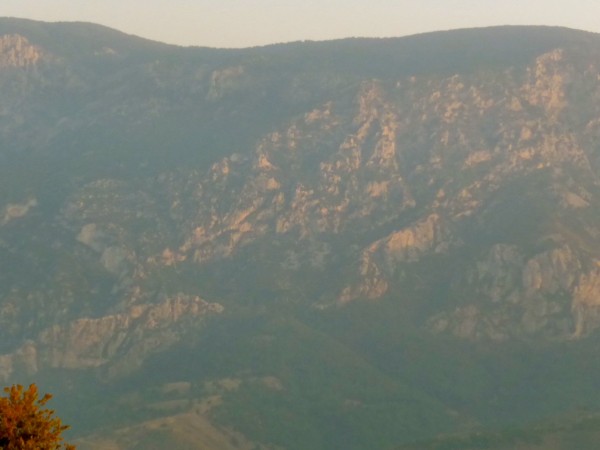 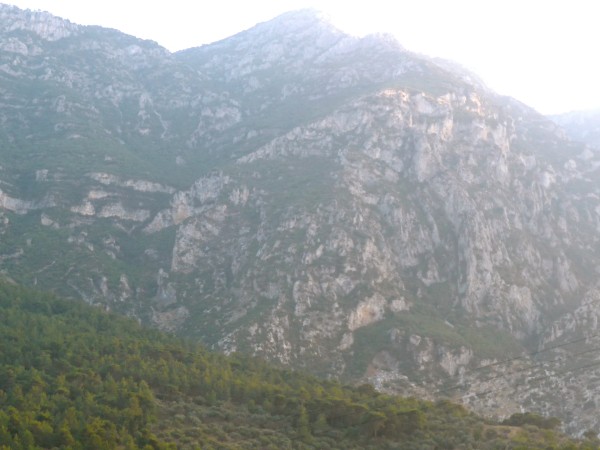 Three hours later I had aborted the journey. I was shattered. I mean, devastatingly exhausted. My heart was pounding and I was physically incapable of continuing. Although I could see the Cybele relief a few hundred metres in the distance, for the life of me I could not reach it; the terrain was too inhospitable. Even if I had had a machete, I would have struggled to penetrate the brutal undergrowth, especially in the oppressive 120° heat.

Bizarrely, along the way my sunglasses were stripped from my head and dispatched to god knows where. I searched for them for over 15 minutes, but to no avail. They had simply disappeared. As peculiar as this was, it did not matter. By this point I was suffering from dehydration, my legs were bleeding from the razor-sharp brambles (and would later require bandaging) and I had begun to feel a sense of panic, and fatigue, for I knew that I was in store for three hours more of the same on my return journey. I took some pictures with a zoom lens and turned back, vowing that I would complete the journey, someday. 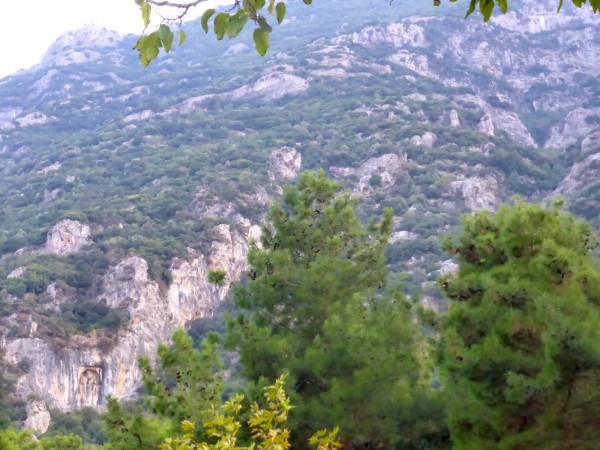 The deceptively close Cybele relief, from the spot to which I retreated. © Andrew Gough

A week later my laptop was stolen in Moscow and all my photos from the trip were lost, including those of the Cybele relief. Fortuitously, I had posted a few on Facebook. Nevertheless, I was devastated.

A year later, I finalised plans for my next Bayram adventure. This time I would visit Troy, Assos, Mount Ida, Pergamon, Ephesus, Aphrodisias and Hierapolis, amongst other historical sites. Still, I couldn’t get Mount Sipylus and the Cybele relief out of my mind. I felt that it was my destiny to return. But how would I fit it into my already overcommitted schedule?

I arrived in Ephesus quite late and prepared for an early start the next day. Having visited the World Heritage site the year before, I moved quickly though its many extraordinary attractions and found myself with the afternoon free. I was trying to suppress my desire to return to Mount Sipylus, but soon gave in. I had always known I would.

I drove like a man possessed and found the site without difficulty, only this time it was packed with hundreds of Turkish holidaymakers. This presented an opportunity, I felt, to secure a guide; someone who knew about this so-called path to the Cybele relief. 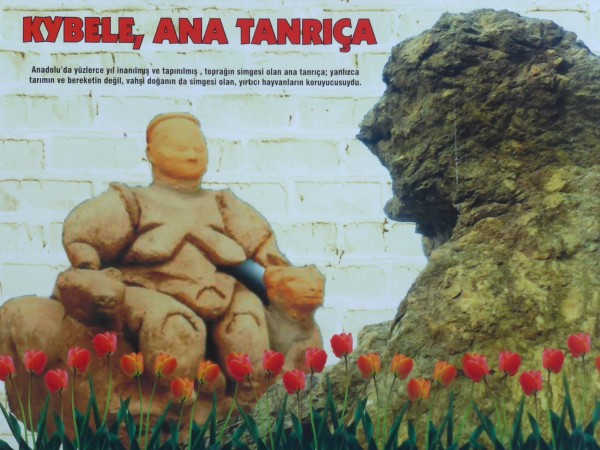 The amusement park boasted a nearby natural rock carving on Mount Sipylus that was associated with Cybele, but ironically made no mention of the Hittite relief of Cybele directly above on the mountainside. © Andrew Gough

I took some photographs of the Cybele relief from the car park and checked the compass on my iPhone, noting that the monument faced due north. I entered the park and requested a guide, but was informed that I should come back three days later, after Bayram, for it was simply too busy – all the guides were performing other jobs during the holiday festivities.

With some persistence I managed to meet my would-be escort, and found him a confident man; one who had grown up in the shadow of Mount Sipylus and knew it well. The problem was he was committed to managing the restaurant for the next two days. I offered him an attractive sum of money, in the hope of persuading him to reconsider, and within a few minutes a young man, maybe 25 years of age, was introduced as my substitute guide. He proceeded to consult with the expert and seemed confident about what was required. The fact that he did not already know the way to the Cybele relief concerned me, but I was blinded by my desire to examine the relief up close, like the traveller on the French postcard. And so we started on our journey. It was already 3pm.

We had been hiking for only five minutes when my substitute guide became disorientated. I seemed to know the mountain better than he did. Although he did not speak English, we understood that we were to veer to the left for a few hundred metres before circling back, thus avoiding the worst of the forbidding terrain. And so we continued. Phantom paths came and went, as did the time. It was 4.30pm and we were nowhere near the Cybele relief. It would be dark in two hours. My substitute guide called his colleagues below for assistance. Nobody answered. 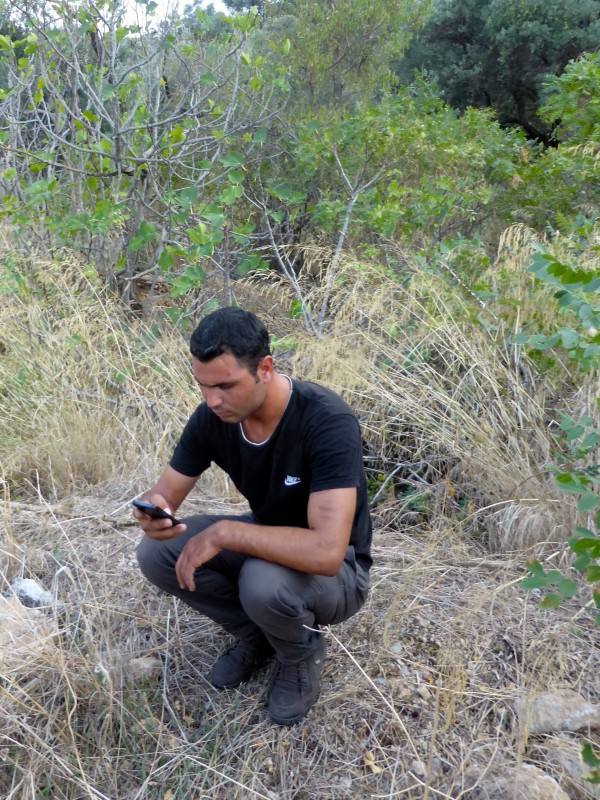 Our path was as heavily wooded as the route I had taken the year before, only worse, for now we were required to scale sheer walls of stone – with no rope, or safety net. One rock face, in particular, was nearly 50 feet straight up, and contained no grooves for feet or hands. We must have been mad. One slip meant serious injury, or worse. We trekked slowly, cautiously. There was no alternative. Our goal was to reach the Cybele relief, and then our descent would be easy, for certainly there would be a path back down the mountain. Wouldn’t there?

By 6pm the sun was setting. I had begrudgingly agreed to forsake Cybele and retreat back down the mountain. Basking in Cybele’s glory was no longer an option. My concern was that our retreat would not be easy. I was exhausted and my knee was throbbing, possibly sprained. For a while I contemplated spending the night on the mountain in the hope that assistance would arrive in the morning. I rationed my bottle of water accordingly. It was that bad.

My substitute guide was upset. I could tell he was concerned about his safety, not just mine. He phoned his family. I shared his anxiety and called a special friend in Istanbul. If I went missing, I wanted someone I cared about to know where I was.

Disheartened, we descended down the very cliff side we had just climbed. The going was treacherous, and on a couple of occasions I opted for taking a running leap off a rocky outcrop into the comparative safety of the tree branches and bush below, rather than risk falling off the walls of stone to my certain peril on the rocks beneath. My guide was half my age, but still, I managed to stay with him. However, before long it was pretty much every man for himself.

It was about this time that I felt an inkling of how distraught climbers must have felt when trapped in precarious, life-threatening situations, where cutting off one’s own arm or leg became a welcome alternative to death. We’ve all seen those movies; and I know this sounds dramatic, but the instinct of self-preservation had taken over. It consumed my consciousness. Irrational, perhaps, but I was suddenly aware of what it felt like to refuse to die. I no longer cared about the pain I was enduring on the trek down. I simply had to get off the mountain, alive.

About two thirds of the way down the worst was over, and the expert guide, who must have seen our wayward ascent from the festival below – or heard our screams – met us and offered to take me to Cybele, albeit in the darkness. I was in no shape to do so and declined, wondering where his magnanimousness had been earlier, when I could have used it. Inexplicably, he continued up the mountain, informing my substitute guide, from what I could gather, that he wanted to take a photo of Cybele for me, as compensation for my struggle and disappointment. I eventually arrived back, in one piece, a bit in shock, with a noticeable limp and the now usual assortment of cuts, bruises and bloodstains. I looked back up the mountain, and in the dim light of the early nightfall I could see that the real guide was also lost. He was nowhere near Cybele.

The festival-goers looked at me as though they had seen a ghost. Indeed, perhaps they had, for I was a sight to behold; a ball of sweat, dirt and blood. I walked towards the car park, wondering why Cybele had denied me the privilege of visiting her – again. After all, I had written about her extensively and paid homage to her in my work. Why had she forsaken me? I vowed to never attempt to visit her again. There would no be no rematch. The final score would remain Cybele 2, me 0.

As I headed back to Ephesus I caught the silhouette of Mount Sipylus in my rear-view mirror. In the moonlight it looked more foreboding than ever. I reflected that over the past year I had visited many of Turkey’s most notable mountain ranges. I had driven through the Taurus mountains and had climbed sacred Mount Ida – the mythological home of Cybele. I had even ascended Mount Judi – the mountain of Noah’s descent, near the Syrian and Iraq boarders; part of a mountain range that is notoriously infested with terrorists. Each felt benevolent, except this one.

But then it occurred to me that Cybele’s Mount Sipylus, was the only mountain that had taught me a lesson – albeit a painful one – both for my body and my ego. Maybe Cybele was my friend after all, I considered. For, as I drove down the motorway all I could feel was a tremendous sense of humility and gratitude and an overwhelming appreciation to be alive. Maybe this realisation and, more importantly, this experience, was what Cybele had intended for me all along. 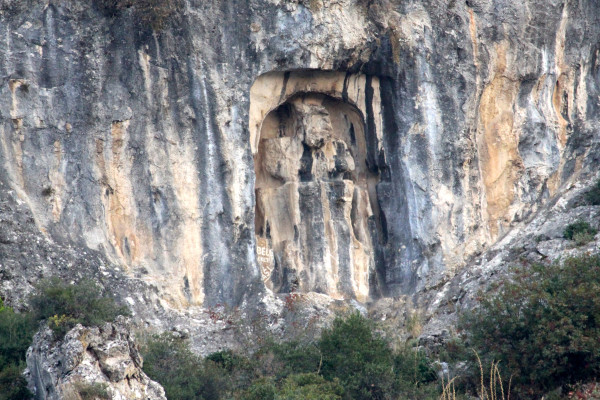 The Hittite relief of Cybele, as photographed from the car park with a powerful zoom lens.  © Andrew Gough