Golgotha is the name of a hill near Jerusalem where Christ was crucified. Biblical texts refer to it as the ‘place of the skull’, leading many scholars to place it northwest of the city, near a rocky outcrop that resembles a skull. To his end, John 19:17 informs us of the legend:

“So they took Jesus, and he went out, bearing his own cross, to the place called the place of a skull, which is called in Hebrew Gol’gotha.”

Nevertheless, scholars are divided and Golgotha’s actual historical whereabouts remain uncertain. Curiously, Golgotha is also the name of a village in northwest England – a name that is unique in Britain – and it is this Golgotha that we shall now examine. 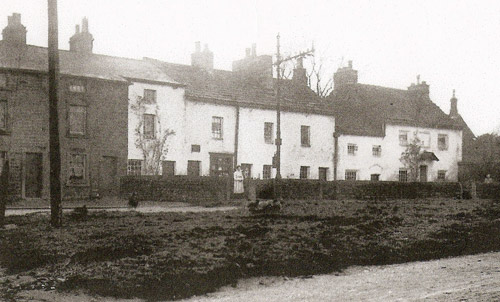 Should the truth be known, this is Margaret’s story, a woman who married the son of a carpenter and whose father died in Golgotha just a few decades ago. Margaret contacted me through my web site and shared her story, which I found intriguing. As Margret hopes to publish her story I will refrain from discussing her account. Thus, let me tell you what I can about this peculiar hamlet in the English county of Lancashire, a short distance from Lancaster, the city whose flag – the red rose – was made famous in the 15th century battle of the War of the Roses;

‘In the battle for England’s head / York was white, Lancaster red’. 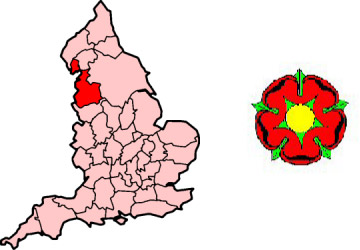 Lancashire, England, and its flag – the red rose

The obscure and largely forgotten community of Golgotha sits just outside the city of Lancaster, near a series of stone quarries and a Quaker cemetery that dates from the 1660’s. Nearby is Lancaster Castle, site of England’s most notorious witch trials. The year was 1612 and King James I had grown intolerant of witchcraft and abruptly passed an act that levied the death penalty against anyone:

“making a covenant with an evil spirit, using a corpse for magic, hurting life or limb, procuring love, or injuring cattle by means of charms.”

The alleged witches were tried and convicted on Lancaster gaol and then hung until death on Lancaster Moor, which was known as Golgotha. 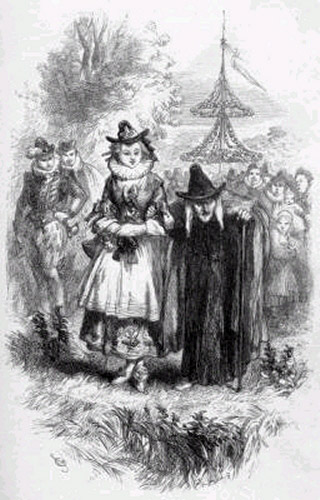 The Lancaster witch trial transformed the town into England’s Salem in the eyes of many historians. Thirteen witches were accused of committing seventeen murders in and around the Forest of Pendle. The Pendle witches, as they became known, believed they had sold their souls to the devil in exchange for the power to kill their victims with an effigy, or voodoo doll. The likeness of the victim was known as a ‘picture of clay’ and was burned or tortured as desired in order to ensure the death or illness of their victim. The witches’ confessions shocked the nation and none were said to have mourned their hanging. 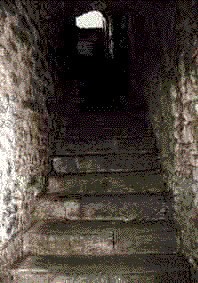 By the early 1880’s, Golgotha consisted of 22 cottages – 20 of which were inhabited by women who called themselves ‘laundresses’. The description is reminiscent of the 19th century Magdalene Asylums in Ireland and the Rescue Movement in Britain, each of which existed to rehabilitate ‘fallen women’, or prostitutes, by making them perform hard labour such as laundry work. The institutions were named after Mary Magdalene due to the saint’s depiction as a fallen woman by the Catholic Church, and many were actually called Magdalene Laundries. Serendipitously, the number 22 – the number of cottages in Golgotha – is also present in the feast day of Mary Magdalene (22 July), further adding to the mystique of the village. 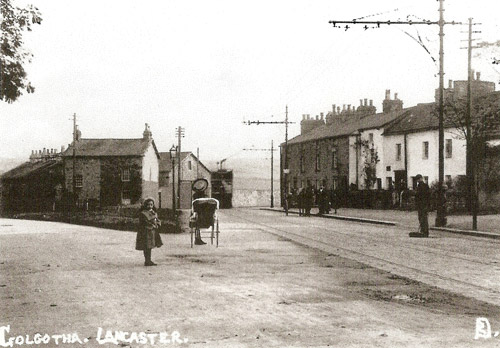 Most peculiar of all, the word ‘Golgotha’ is echoed in neighbouring fields by names more commonly associated with the Holy Land than England; names such as The West Bank, Abraham Heights, Queens Land and others.

Knowing Margaret’s story as I do, it’s interesting to reflect on the research of others, especially the British author William Comyns Beaumont, who lived around the turn of the 20th century. Beaumont believed that Edinburgh, Scotland – approximately 200 miles to the north of Lancaster – was the original Jerusalem and that Britain was the source of many of the biblical legends.

Ironically, Beaumont’s theories were given new life by the controversial yet respected writer Immanuel Velikovsky, who later reinforced many of Beaumont’s beliefs in his own work. Sadly, Beaumont’s most compelling work on the true origins of Britain has never been published, begging the question; why not?

One can only wonder why Beaumont never considered Lancaster to be the original Jerusalem, what with Golgotha and its Mary Magdalene symbolism just a couple of miles away and a plethora of other biblical place names nearby. Intriguingly, Mary Magdalene is commonly portrayed with a skull in sculpture and art. Might this be a reference to Golgotha – the place of the skull – the place of Mary’s mourning?

Could Golgotha, England and its neighbouring lands represent an attempt to establish a New Jerusalem in England? Or alternatively, as incredible as it sounds, do they echo the memory of the original Holy Land in Britain, as Beaumont and other luminaries down through the years have suggested? At first sight, such a proposition seems ludicrous, but could there be some truth in such a suggestion?

In any case, I hope that Margaret tells her story soon. Maybe then further secrets of Golgotha, England can be revealed.

I would like to thank Margaret and her friend Sally for their trust, insight and photos.