The legend of Father Henri Boudet is extraordinary. However, I believe there is one aspect of his life that may be more ordinary than commonly thought: his tombstone. Let me explain. 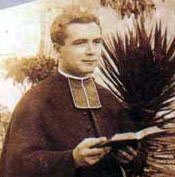 Henri Boudet – the priest in his youth

Rennes-le-Château enthusiasts have documented the mysterious minutiae of Boudet’s life from cradle to grave; from his inaugural assignment as a priest in Durban, a town famous for it’s Arma Christi iconography – and proximity to the medieval Languedoc-Roussillon village of Perillos, to his peculiar book which hints of treasure in the landscape, to his inexplicable donations to Father Bérenger Saunière’s maid, Marie Denarnaud, all the while living modestly himself, and finally to his suspicious death – his body having decomposed rapidly, as if poisoned. But who would want to kill a priest? I suspect Antoine Gélis would have a few words to say about that. The priest, who was good friends with Boudet and Saunière, was bludgeoned in the head until death by assailants who left valuables untouched in his presbytery. 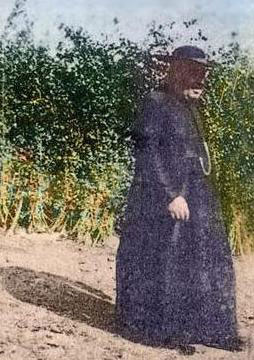 A rare colour picture of Boudet – the priest shortly before his death
(© Franck Daffos and Jean-Pierre Garcia: http://www.rennes-le-chateau-archive.com)

However it is not Boudet’s death that concerns us as much as the symbolism that adorns his tombstone in Axat, near Rennes-le-Château. The tomb is infamous, as it is believed to contain an encoded message, designed by Boudet, himself. 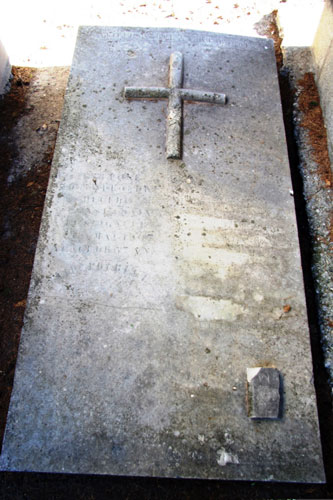 On the lower right hand portion of the tombstone is a raised, rectangular shaped slab, elevated from the base of the horizontal tombstone by 3 cm. The raised masonry is approximately 11 cm wide and 9 cm long. On the top of the tombstone reads “F A M I L L E S A P R E L L A B A T B O U D E T”, indicating the tomb is a family grave containing multiple burials. Intriguingly, Henri’s brother Edmond was buried in this very tomb in 1906 – 9 years before Henri’s death. Edmond is renowned for having drawn the famous map of Celtic Rennes that accompanied his brother’s book. 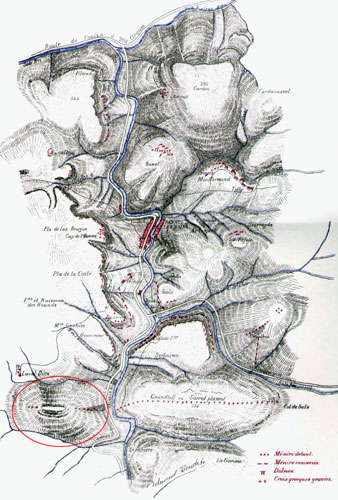 The fact that Henri was buried after his brother Edmond implies that Henri may have been involved in certain aspects of the design of the tombstone, as it was common practice in the day to add dedications for the deceased long after their death. Could Henri have contributed to the peculiar Raised Level on the lower right of the family tomb? The expression on the Raised Level reads I.X.O.I.S and when viewed upside down, 3.I.0.X.I. It is in this view – upside down – that researchers believe the Raised Level starts to reveal its secrets.

It has been noted that the Raised Level mirrors the size of the first edition of Boudet’s puzzling 1886 book; La vraie langue celtique et le cromleck de Rennes-les-Bains (Note 1). Additionally, the ‘310’ portion of the upside down view matches the number of pages in Boudet’s book: 310. Lastly, the ‘XI’ portion of the same view is thought to reference Chapter 11 of Boudet’s book, which many believe to contain a treasure map. Collectively, these observations have led researchers to conclude that the Raised Level conceals a secret – most likely to do with treasure. 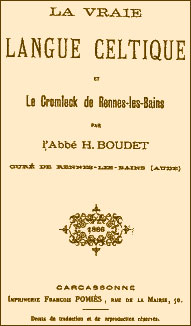 Boudet’s book – Chapter 11 is believed to conceal a secret

The similarities with the book appear to defy coincidence, yet the Raised Level – if in fact it is intended to represent a book – depicts one without pages. Is this intentional, or merely Boudet’s way of concealing the knowledge for those with eyes to see?

Ironically, the tomb next to Boudet portrays a closed book – with clearly visible pages on its side. The same is true of Berenger Sauniere’s priestly regalia. Each, coincidently, are examples of a popular symbol of the day called the Apocalyptic Lamb. 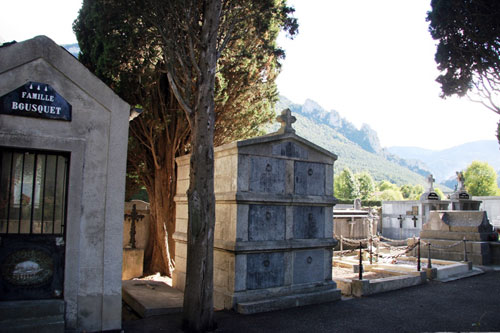 The Apocalyptic Lamb: The Tomb next to Boudet’s and Saunière’s regalia – close up © Andrew Gough

In each example, the closed book is highlighted by textured pages, providing perspective and reinforcing the fact that we are looking at a book and not an ambiguous slab. So why are no pages illustrated on Boudet’s tombstone? Let’s take a closer look at the alleged code on the Raised Level in hope that it will shed some light on the matter.

At first glance the expression ‘IXOIS’ seems to defy language, combining Greek, Latin and English characters to form a nonsensical string of letters. Could it be a pun? Is there evidence that Boudet used puns to communicate his message? The answer, not surprisingly, is yes.

On page 92 of Boudet’s book he states the importance of puns in his work, albeit in a rather lucid fashion:

“We believe that the Numide language can easily assert and, by examining the current language of Kabyles, one will make sure that it is made from puns and by consequence the Punic one – to pun (peun) to make puns.”

So, is I.X.O.I.Σ. a pun? Well for a start it’s similar to ‘Ichthus’, which is a Christian expression for Fish, or Jesus.

The individual letters of the expression hold the following meaning:

Thus, the conventional interpretation of the word stands for “Jesus Christ, Son of God, Savior”. But how do we get from Ichthus to I.X.O.I. Σ? Recent research (Note 2) has confirmed that the two expressions represent a slight variation on a theme and essentially have the same meaning. Here, the Theta is depicted as an ‘O’ and the Ypsilon an ‘I’, reflecting a common and acceptable variance in the way the expression is written, not unlike the way the Romans wrote MOMENTVS and meant MOMENTUS.

Furthermore, Dutch researcher Wouter de Boer has discovered an expression in a church in the French town of Sisteron – The Gateway to Provence – that suggests it was not unusual to showcase this sequence of characters; in other words, it is not a unique expression. 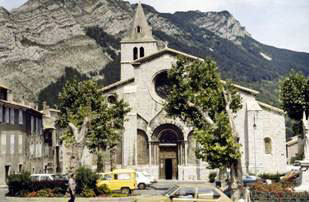 In the Cathedrale de Notre Dame des Pommiers et St. Thyrse of Sisteron, de Boer has discovered a similar symbol to that displayed on the Boudet family tomb. And it also is elevated – only this time on a church wall – and with a fish above the letters. 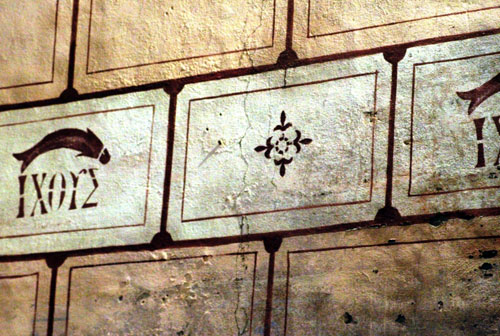 IXOYΣ on the wall of the cathedral
(© Wouter de Boer)

If I.X.O.I. Σ does in fact refer to Jesus (which is commonly represented as a fish), and is not unique – as the Rennes-le-Château treasure hunters would have us believe – then the reference to Chapter 11, page 310 of Boudet’s book is another sort of fish; a red herring! And despite the similarity between the dimension of the book and the Raised Level, there is no visual indication that Boudet intended us to conclude we were looking at a book. So what does it all mean?

I believe that by constructing a Raised Level that represents Jesus, Boudet was symbolizing his ascent to Jesus in heaven – to the house of God. In other words, the Raised Level is the visual equivalent of saying;

In death, I RISE above man to Jesus – to God.

Thus, I believe the raised platform is a visual pun, a symbolic representation of the priest’s ascent into heaven. It symbolizes his being raised above man into heaven, or as the expression suggests – to Jesus. And just possibly, Boudet – or his caretakers after death – chose the dimensions of the book to pay homage to the fact that his work – the book, La vraie langue celtique et le cromleck de Rennes-les-Bains – was his own special testament to Jesus. Alternatively, the Raised Level may depict the Bible, illustrating how Boudet’s faith led him to Jesus in the afterlife.

I suspect that this ‘raised / visual’ representation is more common than we realize, and if we maintain a watchful eye we should find additional examples, like the one in Sisteron. At the end of the day, Father Boudet was a fascinating figure and man of many talents – writer, linguist, researcher, and least we forget – a man of God. He was a priest. 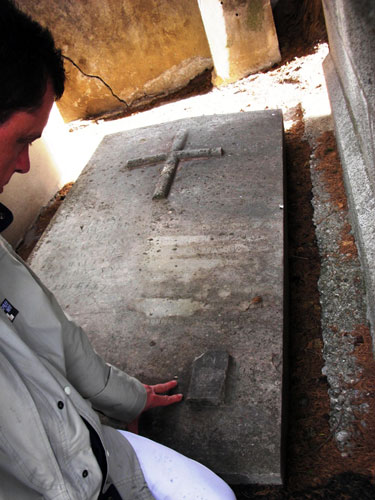 My friend and Rennessence colleague Corjan De Raaf for his help and guidance in translating the Dutch Forum for my review – and his considerable insight on this subject.

My friend and Rennessence colleague Filip Coppens and Société Périllos for the Boudet translation.

The superb researchers at Terug naar de Bron, for their many insights.

The Dutch researcher Wouter de Boer, for the kind use of his photographs of the cathedral in Sisteron, France – and for his insight.

Klaas Van Urk and his research team for their insight into Henri.

Note 1: Rennes-le-Château researcher and writer Klaas Van Urk – along with his research team, have observed that the dimensions of Boudet’s raised tomb slab are the same size of the first edition of the priest’s book: La vraie langue celtique et le cromleck de Rennes-les-Bains. Van Urk is a superb researcher and has investigated many of the places and anomalies featured in Boudet’s book. Van Urk’s own book was a bestseller in the Netherlands and is called ‘Search for the Holy Grail and the Ark of the Covenant‘. An audio interview with Van Urk can be found here.

Note 2: The researchers in the private Rennes-le-Château form on Terug naar de Bron have studied this and other related aspects of the life of Henri Boudet and deserve credit for proving beyond reasonable doubt that the Raised Level on the tombstone to mean ‘Jesus’.